Skip to content (Press Enter)
Home>Blog>Insight>The Proper Way to Use a Dash and Hyphen; Semicolon and Colon

Like you probably know, dashes, hyphens, semicolons and colons are all punctuation marks but while a lot of persons know they are different, some still cannot help but make mistakes with either how each is used, or confuse one for the other.

Here in this article, my desire is to clear every doubt you may have as regards the use of hyphen and dashes or semicolons and colons. Shall we…

A hyphen is also used in writing if you must divide a word at the end of a line. Worthy of note is that words should only be divided between syllables or pronounceable parts. If you’re unsure of the correct place, consult your dictionary.

When a hyphen is introduced in a sentence where it is not supposed to be, it can alter the meaning of the sentence. Consider the following examples:

Bola, please could you re-count the balloons.

Bola, please could you recount the story.

In the first sentence, Bola was asked to count the balloons again whereas in the second, she was asked to retell the story she told at first.

Dashes could either be an en dash (-) or em dash (―). The en dash is a little longer than a hyphen but not as long as an em dash. Both dashes are used to create emphasis in a sentence, to indicate a change in thought, or an abrupt break.

They are used instead of places where you would use a bracket to explain or clarify something but don’t want to use a colon. It is important that you note that in formal writings, it is advised to use a bracket instead of a dash.

On reaching the junction, I saw Jide―the same person that refused to give me a lift with the excuse that he’d be late to work―chatting with every sense of abandonment with a lady I didn’t recognise.

I couldn’t forget how the whole incident made me feel-drained.

Please note that both types of dashes were demonstrated above. The second sentence looks like a hyphen―my reason for always choosing the em dash over en dash. Also note that both dashes and hyphens are not preceded or followed after by a space. Consider the above examples again closely.

Semicolons are used to separate two independent clauses not joined by a conjunction (such as and, or, but, for, nor, yet, so).

Genevieve Nnaji is neither married nor engaged, but her film Lion Heart is still viewed with delight by her fans.

Genevieve Nnaji is neither married nor engaged; her film Lion Heart is still viewed with delight by her fans.

The semicolon is also used to separate main clauses joined by a conjunctive adverb (such as therefore, however, furthermore, nevertheless).

In this part of the world, we still battle with the cold weather; however, people in the North can’t keep their clothes on while they sleep.

If you have a list with some or all of the items in the list having commas, separate them with semicolons instead of more commas.

The meeting was attended by Ms Ngozi, the English teacher; Mr Ese, the G&C; and Mr Clement, the Principal.

Colons are used to introduce a list especially after a sentence that uses such words as these, as follows, the following.

In order to gain admission into the university, most science students would require a credit in the following subjects: Chemistry, Physics, and Biology.

Note: if the list immediately follows a verb or a preposition, do not use a colon to introduce it.

In order to gain admission into the university, most science students require a credit in Chemistry, Physics, and Biology.

A colon is also used to introduce a long or formal quotation.

The following quotation appeared in Eleanor Roosevelt’s autobiography, This Is My Story: “No one can make you feel inferior without your consent.”

Colons are also used between the hour and the minute of the precise time, between the chapter and the verse in biblical references.

Lastly, Colons are also used between the hour and the minute of the precise time, between the chapter and the verse in biblical references. 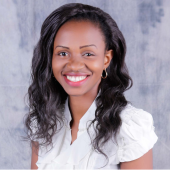 I love it when your writing comes out in it's best form, free of grammatical and punctuation errors. I am a University of Nigeria, Nsukka trained Pharmacist.

The Proper Way to Use a Dash and Hyphen; Semicolon and Colon

Why Your Articles/Books are Poorly Edited